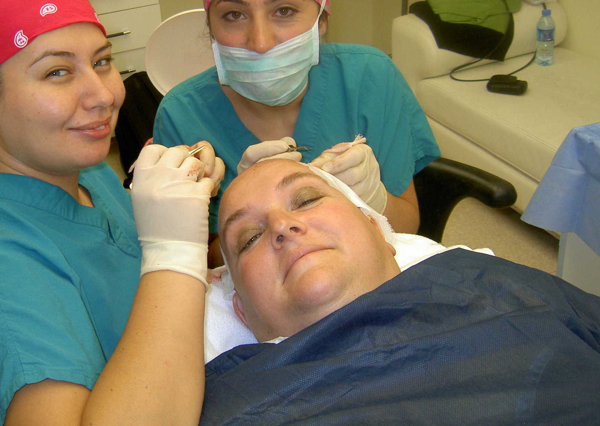 About 20 years ago I started losing hair. It occurred sneakily, not a big business or anything. It just came little and little. During all these years I have tried a variety of things to change this situation. I investigated if I'm sick, checked hormone balances, took vitamin cures, tried vegan diet, been on continuous visits to companies that suggested I could glue some kind of wig on my head, pour colored fibers into my scalp and of course I could use a lot of different types of hairstyles. Some of them were really awful. As I understood it, my hair loss was due to bad genes. On my grandfather's side, there were several who lost their hair early. In the end, I decided to just give up and wanted to change the situation. Then I started to think about different possibilities again. I contacted various clinics here in Stockholm and went to consultations. They all said about the same things, it was be possible to do something about my baldness. But it would cost, a great deal, money which I didn't have much and I didn't think it was worth putting on a new hairstyle.

I pondered a little further, talked to acquaintances, someone mentioned that in Turkey, similar intervention was done at a significantly lower cost. I did as most modern people do today, I googled. I found several different suggestions for clinics that could perform the procedure. I found a company, Istanbul Hair Clinic which was in some way based in Sweden. I read on the company website and checked Flashback. It sounded good and the website looked great. I contacted the company and they quickly answered my questions. I asked a lot of questions about everything I wondered. I came closer to a decision to actually have the procedure performed on me. I got in very good contact with Firaz at Istanbul Hair Clinic and in the end I booked the procedure. Once I had booked the procedure and paid the real turmoil started, would I be exploited, what if I came to Istanbul and no one would meet me at the airport, or what if the hospital would be dirty and uncomfortable? I looked up the company at the General Complaints Board, I checked everything I could and I asked my mother and her friend to come along. Then, on October 7, I went to Istanbul and all my preconceived assumptions came to shame. After a very nice flight with Turkish Airlines, we met at the airport with Firaz. He took us to the wonderful hotel Casa Rosa. The hotel was just as nice as it looked in the photos, clean and tidy, nice staff and good breakfast with a great view. Great location in the middle of old part of Istanbul too! Once at the hospital, I was well cared by the staff there. I was warned that the local anesthetic could hurt, but I don't think there was any danger at all. I'm actually amazed at how painless everything has been along with this hair transplant. I have to admit that it was a difficult procedure, it is not easy to lie still for so long and it takes a long time. But everyone who did the work was so very friendly and helpful. For the aftercare there was the same fine service as the procedure itself. I have to say that I have never had such a good, professional and nice treatment. Firaz helped me, my mother and her friend with everything we wondered about and the people of Istanbul were very friendly. I plan to return to Istanbul to experience more of this fascinating city.

Once I got home, everything had gone well, everything healed nicely without any complications. Firaz had contacted to confirm that everything was going well. I felt very well taken care of.

Anna was undergoing surgery and thinks that it was going very well.