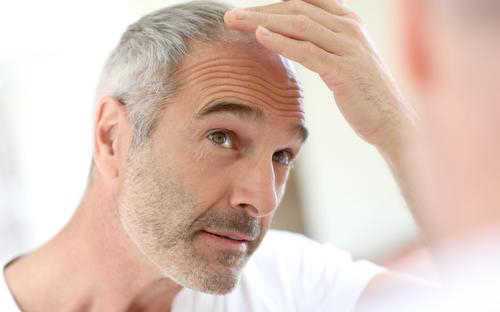 Most men begin to lose hair already at the age of 17-18, while others retain their hair to their 40s without suffering any hair loss. The first thing that happens is that the hairline in the forehead pulls upwards and it starts to create empty bays at the temples. Then comes the round thin spot on the top of the head. This grows in size and eventually the entire top of the head will be without hair. On the sides, men almost never lose their hair. Except for men losing hair, the quality of the hair that is left is worse and worse. The hairs become thinner, grow slower and lie flat against the head. It gets lifeless because the hair cells can't grow strong and strong hairs anymore.

Male hair loss is 95 percent caused by hereditary factors. The most common form of hair loss in men is androgenetic alopecia caused by the hormone dihydrotestosterone (DHT). This variant of hair loss is normally limited to a certain part of the scalp, usually the front part of the head and the head. The reason why not all hair follicles are affected is because some are not sensitive to DHT. In a transplant, these hair follicles are placed in the affected area where they retain their properties and grow further without being affected by DHT. This difference depends on how much testosterone (male sex hormone) is broken down into the scalp and forms dihydrotestosterone, DHT. Men with high transformation of testosterone will have a more aggressive hair loss and will become thin hair faster.

Hair loss varies from person to person. Dr. O’Tar Norwood created a scale, the Norwood scale, to measure degrees of hair loss in men. By using this grading and looking at the different categories you get indications of how much hair needs to be transplanted, for example, if it is

Grade 1: The client has not suffered any major amount of hair loss. Hair transplantation is not recommended in this case.

Grade 3: At this stage, hair loss has been going on for a few years. Hair transplantation is most often recommended.

Grade 4: Hair loss at the temples and on the head (and so-called coves) are typical of this degree. Here most decisions are made to carry out a hair transplant.

Grades 5 & 6: The hair loss has now reached a critical stage at both temples and at the head. Hair transplantation is a very common decision here.

Grade 7: To this extent, many men are relevant to hair transplantation. However, the limitations in the donor area mean that only the hairline can be remedied and the head remains somewhat bare.